Skip to content
Asia cup cricket is one of  the great event in cricket history from the nation of south Asia. All four south Asian cricket Team nation has took part to this event.

Asia Cup 2016 T20 Live Streaming | India vs Pakistan vs Bangladesh vs Sri Lanka. Watch Asia Cup Cricket Live Online on Star Sports. The premier Asian international cricket tournament The Asia Cup 2016 will be a T20 affair this time. The tournament will be played in Bangladesh from 24th of February 2016. Traditionally Asia Cup used to be a 50 over affair, but since it is preceding the World T20 2016 in India, the participating teams requested a T20 format tournament. Sri Lanka is still to announce their squad. 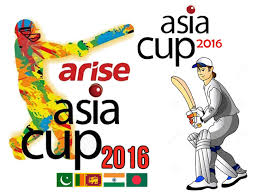 India and Sri Lanka have won the tournament five times each. This time apart from India, Pakistan, Bangladesh and Sri Lanka in the main draw, associate Asian teams like Afghanistan, Hong Kong, Oman and the UAE will battle it out for a sole spot in the main draw.
Bangladesh will be hosting the tournament for fifth time and will be played from 24th February 2016 to 6thMarch 2016. The tournament will be played on rotation basis henceforth with the 2016 and 2020 edition being in the T20 format, since they will precede the World T20 in those years. The tournament will return to the 50 over format in 2018 and 2022.

The 4 teams will take part in Qualifier round for Asia cup 2016 which will be held in Bangladesh. Afghanistan, Hong Kong, Oman and UAE will battle for the 5th team to play in regular Asia cup t20 2016 from 24th Feb to 6 March. The Qualifiers will include a single round robin format in which all teams play matches against each other and team who tops the out of 4 teams will join full member teams. If two teams have same points, then the net run rate is calculated.
Afghanistan, Hong Kong, and Oman have all qualified for 2016 World T20 in March in India.
This is the 3rd time when Bangladesh will host the Asia Cup continuously. World T20 2016 will also be started after the 5 days of Final of Asia cup 2016 on 6th march. The Asian body will, however, host the Asia Cup with editions scheduled for 2016, 2018, 2020 and 2022.

Asia Cup will alternate between ODI and T20 formats: