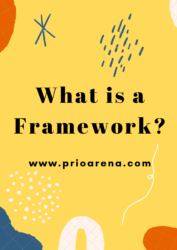 What is a Framework in Programming?

The second one, of course. Although at first it is possible to use your thoughts and imagination, the biggest problem is that the engineer must be proficient enough, because if he makes a mistake in the beginning, the entire building can collapse.

In this case the second option is better. As I have said before, Strong structures that have sufficient extensibility and credibility.

The platform is an environment through which we can develop and execute various software applications. There are two types of platforms :

Development Platform is the type of platform where applications are developed. Where programmers and developers write their code is called a development platform.